In the time of crisis, we need a guide to lead us. Not properly “us” but our ears. In this case, the leader is Luca T. Mai and Heavenly Guide is the sacred book that will enlighten the way. Luca is 1/3 of the iconic Italian jazzcore trio Zu, well known to abuse the sonic matter more and more at every release. There’s an album at the horizon by the trio but for now, we have the solo project of Luca where he unleashes all the power of the baritone sax. And it’s literally a solo album, one instrument at every track, so powerful to cover the range of an orchestra. Maybe some echo here, some distortion there, but only the sax remains the same in every song.

It starts with an ambient intro sampling the arrival and departure of trains, setting the topic of a journey right before the prepotent entrance of the baritone sax that unleashes wild and tight blues notes, alternating them with a very low note as a pedal at every measure. Epistrophy sounds like a solo swing and loudly clarifies the intentions of the album. The second track is the title one, very ambient-y with the wide repetitions of the delayed sax plus finely detailed drones at low volume in the mix, accompanying the protagonist that jams over simple pentatonics. Manum and Ferrum sounds fun since the title, it reminds me of an Italian way of saying. If a djent guitar ever sounds like a sax, this is the case, due to the sick syncopation and the sonic clash between the highest notes. And this is the first half, then comes to the activation of the wah pedal and everything is blown up by rad chromatics. All of these prosecutes on The Sound Of His Horn, a sort of anthemic phrase. The echo makes the instrument resonate through the sky, recalling the epicness of the Lydian chord through single notes and overtones. Gazzeloni is a fun title too. A swing on drugs and chromaticism, cascades of notes played in a flawless way. Another atmospheric track is Bahr Attla, a slow ride on a looping kick drum and some over-reverbed sax, right before the ending one Celestial Nile. Flowing like the river that created the Egyptian culture, a stream of long low notes on an insane echo streams right into your mind and heals whatever you may have broken inside. A symbolic interruption in the middle of the sonic river before erupting again with renovated energy and closing the solo chapter in complete silence. 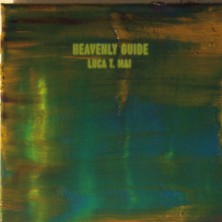 Heavenly Guide is a curious experiment. It deviates the listener from both the usual usage of a saxophone and the abused version of the Zu trio, it’s a mysterious guide that leads the lost souls on an even more mysterious path in search of whatever truth. The smoky cover reinforces the sonic concept, blurred colors for a misty soundscape.

Listened to and written for you by Music Pills

This site uses Akismet to reduce spam. Learn how your comment data is processed.